Improving the police response to stalking

The Alice Ruggles Trust is one of 21 charities and partners who, as members of the National Stalking Consortium, are signatories to a “super-complaint” on the police response to stalking that was registered on 25 November 2022, the tenth anniversary of the day when stalking first became a criminal offence in England and Wales.

The purpose of a super-complaint is to raise concerns that will be considered and investigated by His Majesty’s Inspectorate of Constabulary and Fire & Rescue Services (HMICFRS), the College of Policing, and the IOPC. See information about the police super-complaints system here. 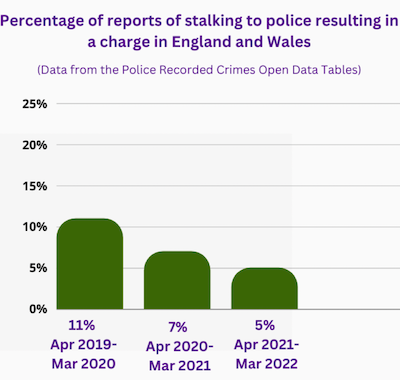 Among the concerns raised by the Consortium are:

The Consortium has put forward several recommendations to implement systemic change to improve the police response to stalking, including:

For more information see here and to view the super-complaint itself, see here.

The Alice Ruggles Trust does not seek to blame the police for failings but rather to work with the police and other agencies to learn lessons. We need stalking cases to be recognised for what they are rather than being passed off as lesser crimes, and we need them responded to appropriately. But we need to work together to bring about sustainable change.

We have identified five points of action:

The first two points raise training issues particularly for the police, but also for prosecutors and the judiciary; the third is essential because a criminal justice response is not generally adequate in itself and does not address risks going forward.

Our Trust is particularly focused on raising public awareness (see our resources pages), and we are actively campaigning for government funding to sustain specialist stalking advocates (ISACs) across the country—see here. ISACs play a critical role in supporting the victim’s safety and wellbeing, as they are trained to help, support, advise and advocate for stalking victims as well as to liaise with the necessary range of professional services.