On the last of the UN’s 16 days of activism to end gender-based violence (2022), the Alice Ruggles Trust released a new resource for school assemblies to complement our existing PSHE lesson plans for schools. This is accompanied by an offer to deliver a first assembly and train school staff in schools local to the area where Alice was born and brought up. 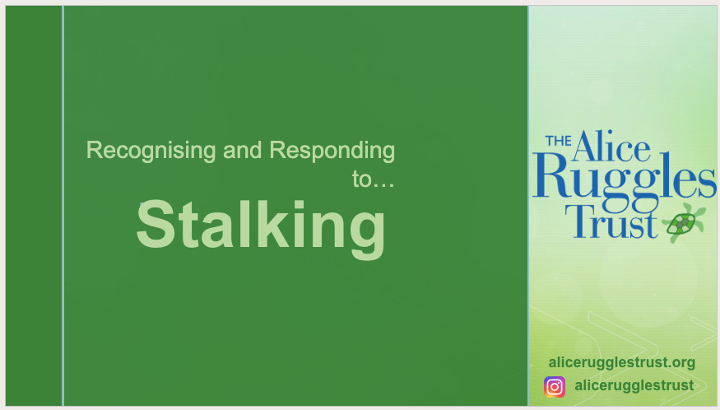 According to statistics quoted in the National Stalking Consortium’s “super-complaint” on the Police Response to Stalking, stalking affected an estimated 1.8 million people in England and Wales during the year to March 2022. This includes over 220,000 16– to 19-year-olds.

Over the past five years, Alice’s story has been used to inform thousands of people about how to recognise and respond to stalking. As part of our efforts to raise awareness of the dangers of stalking among young people, our PSHE Association-Accredited Relationship Safety Resource has helped to do this via PSHE lessons in schools. These focus on recognising healthy and unhealthy behaviours, managing unwanted attention and supporting a friend. Our PSHE resource has been downloaded over 5000 times.

We have now designed a school assembly focusing on stalking, with accompanying walkthrough notes, to complement the existing Relationship Safety Resource. From the beginning of 2023, the Trust is offering to visit schools in the South Leicestershire area to lead assemblies and train staff to confidently use the resources themselves going forward.

“Raising public awareness, especially among young people, is of key importance to us. We want to know that the next generation, that Alice should have been a part of, will recognise stalking for the vile crime that it is—not as a bit of a joke, but as something that is highly distressing for the victim and potentially extremely dangerous.”

For more information about the school assembly and the offer to deliver and train, see here.