Each year, Leicestershire Women’s Aid holds an event in Leicester city centre to commemorate the lives lost to domestic violence over the last year. In 2017, 107 women lost their lives as a result of domestic violence. As each of their names were read out, one more of the women present donned a white mask, creating an impactful visual reflection of these truly awful statistics. 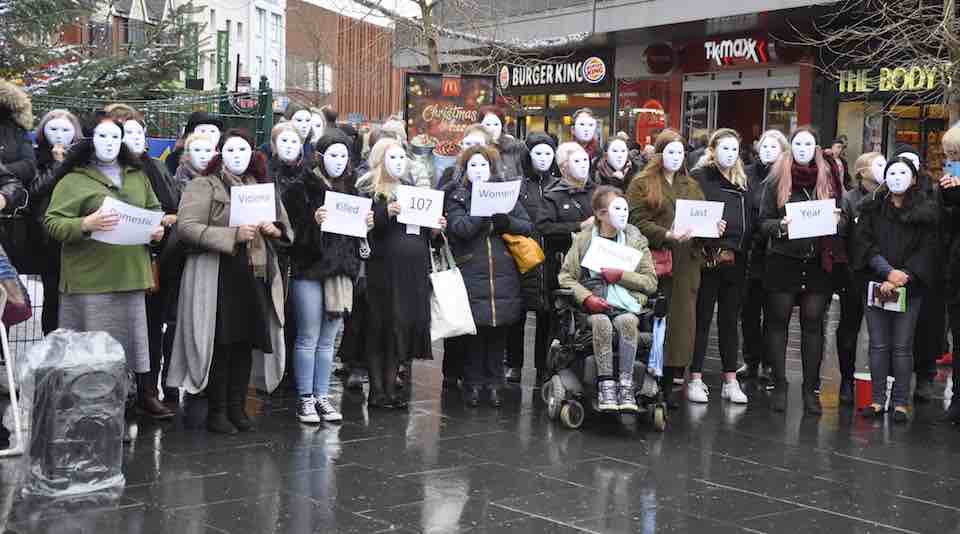 After this, Sue delivered a powerful speech, which is transcribed below.

Three years ago, if I had seen an event like this, I would have hurried past. What did these people have to do with me? Domestic violence was not on my radar, domestic violence did not happen to people like me or indeed to any people that I knew. But then my beautiful daughter Alice was killed by an ex-partner after a relentless stalking campaign. She was just 24 years old. Even then, I still did not think that she had been a victim of domestic violence. I had thought (as so many other people do), that domestic violence happened to a certain type of woman; someone who was meek and submissive perhaps, or even someone argumentative and loud; someone who I might see on a soap opera on television.

But as the investigation into Alice’s murder unravelled I began to see the links between controlling, coercive behaviour and stalking. I began to see that Alice had been a victim of domestic violence, not the traditional domestic violence that I had always thought about - the vile physical violence where a partner controls by beating and fear - but something very sinister where control over a partner is maintained by manipulation. Trimaan Dhillon controlled Alice by degrading remarks followed by gifts, by attempting to isolate her from her friends until he was her only friend, by eroding her strength and making her feel dependent. It was so subtle that few of us saw what was happening. I began to see that the stalking followed because when Alice had tried to escape that unhealthy relationship, her ex-partner realised he was losing his control over her and he could not accept that. So he killed her. I began to see that domestic violence takes many different forms.